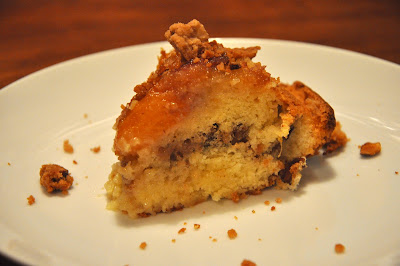 If all I showed you was the picture above, you would think my cake came out just like all the others. That it was light and fluffy and perfectly cooked. I've said before on this blog that when I really don't like how a recipe came out, I don't post it - unless it's worth my making again, I don't want you thinking you should be making it. However, the point of Tuesdays with Dorie is to try out new recipes. To learn techniques and flavor combinations I've never tried. So, I think  I should tell you the truth about this one. I didn't quite beat the egg whites enough, I think. I'm pretty sure the cake should have been baked for more time, but the recipe says 45-50 minutes, so I figured that after 60, it had to be done. I took it out, it was browned and yummy-looking. Twenty minutes later, there was a ditch in the center, and when I flipped it over, I saw this: 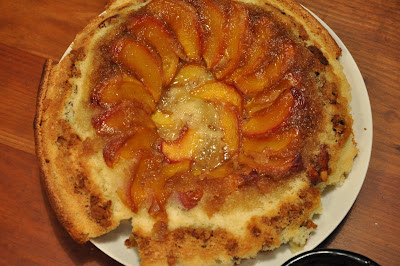 But that's really okay. The center was uncooked, so I cut it out and threw it away. But the rest of it - the outer circle of peaches (I was in the mood for peaches instead of nectarines), was so light, so fluffy, so delicious. I have never made a cake this fluffy, at least not that I can remember. I left the oats out of the streusel, but it baked up crunchy and delicious (even though I skipped the food processor and did it by hand!). Obviously, this cake wasn't a huge success. But it's a great recipe if you bake it for longer than the recipe states, and we found a way to still enjoy it. I know I'll be trying another chiffon cake in the future. Thanks to Marlise of The Double Trouble Kitchen and Susan of The Little French Bakery for hosting this week's Tuesdays with Dorie. The recipe can be found on their blogs or, as always, in Baking with Julia.
Enjoy!
at Wednesday, September 05, 2012

I think we all had to bake it longer than the recipe called for. I'm starting to wonder if the reason we didn't have problems with the centre undercooking was because we used a 10.5 inch pan.

That could be - sometimes just a little measurement difference changes the timing.

I had to bake my cake 15 minutes longer than the recipe said. Then the goo burned all throughout the oven. Oh well ... on to the next one. Glad you ended up liking the part of the cake that was done and delicious! Blessings, Catherinehttp://praycookblog.com/2012/09/twd-bwj-nectarine-upside-down-chiffon-cake/

Baking time seemed to be an issue all around.
It looks like you cleverly worked around your problem :-)

Sophia
Baker, aspiring opera singer, and high schooler. Let's see what baking adventures the musical life can take us on... 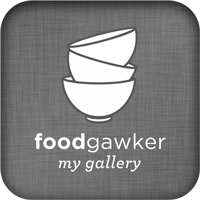 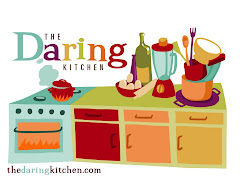